A split is a spare in bowling when the first ball splits the rack of pins.

A split in bowling is one of the most difficult spares to make, but it becomes easier when you know how a certain split looks like and how split strategy works.

The Numbers of Bowling Pins

In ten pin bowling, the bowling pins stand in a triangle formation.

At the top of the triangle, there is the head pin or front pin or pin 1. 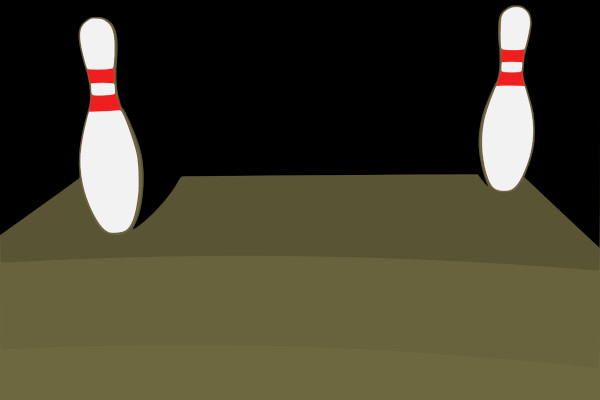 There are a few different types of split spares. The following splits are very common when you are bowling. There are other splits, too, but these are the most common ones.

A baby split in bowling is a spare where a bowler leaves pins standing, that are separated by one pin or less. With numbered pins, this means a 2-7 split, 1-4 split, 1-6 split or 3-10 split.

3-7 or 2-9 baby splits are less common since they rather include interior pins.

These splits have a number of names – bed posts, goal posts, snake eyes, 7-10 split or similar – the pins on the rear row’s far ends remain standing while all other pins have been toppled.

A “Big Four” bowling split is the combination of two adjacent pins on both sides of the pin formation. That is a 4-6-7-10 pin combination on the opposite side, and it is also known as “Big Ears”.

A bucket in bowling is a specialized form of spare that leaves four pins in the shape of a diamond arrangement. This cluster consists of 2-4-5-8 pins or 3-5-6-9 pins. A 1-2-3-5 bucket is also possible, but is very rare.

A Fast Eight split means that the bowling ball knocks down eight pins, but misses the 4-7 or 6-10 pins left standing.

A Greek Church split is a 4-6-7-9-10 split. The name originates from the resemblance to the pattern of “Greek Church”. It is one of the most difficult splits to convert.

A “Sour Apple” split, also known as “Lily” in bowling is a split which leaves 5-7-10 pins standing.

A Tap split means that only a single pin is left standing.

Splits standing in a horizontal line are the most difficult splits to convert. A 7 and 9 pins are a good example for this. Splits in bowling like this are unlikely to bounce in a way that the pins would knock each other down, that is where the name comes from.

What Causes a Split in Bowling?

In ten-pin bowling, a split occurs when the first ball of a frame knocks down the headpin, but two or more non-adjacent groups of one or more pins are left standing.

How to Knock Down a Split?

Different splits require different spare techniques. A professional bowler can spare all kinds of splits by knowing how to bowl. A split is the most difficult spare in bowling, but with some practice, you can learn to make them.

It is a good strategy to hit one pin into the other pin, knocking down both. This needs a good aim, proper throwing power, and a little bit of luck.

The bowler can change the direction of the throw, by standing to one side or the other side, or by trying to manipulate the angle of the shot.

How Much Points is a Split in Bowling?

If the spare is fully completed, it is awarded ten points, with a bonus for whatever is scored with the subsequent ball (only the first ball is considered).

If one or more pins are missed, then the number of knocked down pins is calculated, and there is no bonus points.

This article explored how splits can happen on bowling lanes so you can be better prepared for your next game.

We tried to raise awareness about the most frequently occurring splits, and strategies about how to hit them.

I hope this has been helpful. If you want to learn more about different kinds of bowling splits, feel free to reach out!

Did you know that there are different ways to sand your ball?In this guide, we will discuss the different types of sanding pads and how to use them. We will also provide tips on how to get the...

Continue Reading
link to How Much is a Professional Bowler Salary?

Did you know that professional bowlers earn a good salary? This may come as a surprise to some, but for those who are passionate about bowling, it is definitely a lucrative career.The...

AllenBowl.com is a participant in the Amazon Services LLC Associates Program, an affiliate advertising program designed to provide a means for sites to earn advertising fees by advertising and linking to Amazon.com.